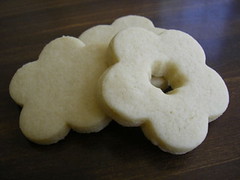 My kids and I love cooking together. My girls especially love to bake, and we often spend time together baking cakes, cookies, cupcakes and other sweet treats. Recently we decided to try baking some sugar cookies for Christmas, and we planned on decorating them in with Christmas colours and decorations and give them as little homemade gifts from the girls. Unfortunately they didn’t turn out exactly as planned, and they weren’t really suitable to give the family and our friends as gifts.

It all started off great. The kids found some cute cookies that they wanted to make here which were the shapes of stockings, stars, Christmas trees and presents. They found a sugar cookie recipe and we set out to the store to find the ingredients. We took our list of ingredients, decorations, materials to wrap the cookies as gift and utensils that we didn’t have at home that we needed, and started making our way around the store. Everything went well, and I even got a few gifts for the family, and even a food processor that I saw recently and I couldn’t resist. All went well at the store, so home we went. 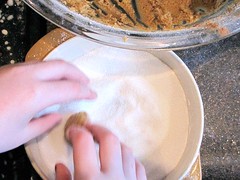 After getting everything inside and into the kitchen, we decided to start baking. My girls, aged 8 and 10, are quite independent, and really my role was supervisor. They meticulously measured out their ingredients, mixed everything thoroughly. The rolled out their beautiful dough and really enjoyed using their new cookie cutters that we bought at the store. They enjoyed it so much, that they took their time with it, and even sometimes rerolled the dough just so they could cut some more cookies. Finally, they got their cookies into the oven (with my help) and sat in front of it for the entire time that they were inside until they were a beautiful, golden brown colour. I took them out of the oven for them, and they sat by as the cookies cooled.

Next they made different colour icings for the cookies (red, green and white of course) and when the cookies had cooled, they got their creative juices flowing and decorated them, just like the beautiful designs that that they had found online earlier. We waited for them to cool and set, and the girls made some Christmas cards to attach their little packages. The packages were the wrapped with care, and they even tied little bows around them and attached the cards that they made. They next day which was Christmas Eve, we drove around to friends and family members homes and the girls hand-delivered their gifts.

The next day, my parents came over for Christmas Day lunch. The girls were occupied with their gifts that they had been spoilt with. I asked my mother if they had tried the cookies that the girls had made. My mother seemed a bit apprehensive to answer. With a bit of pushing, I finally found out what they thought. She told me how they had given them to the dogs because they didn’t really like savoury cookies. I said to them that they hadn’t been savoury, that they were sugar cookies. Later that evening when I was cleaning the kitchen after another busy Christmas, I checked the ingredients we’d bought the day before. Turns out we bought a big bag of salt… not sugar. Our sugar cookies were in fact salty cookies. Definitely not what we had planned for, but I didn’t have the heart to tell the girls.

People always ask what the secret behind fishing is. The answer to this might be tricky – that’s because for one, to be good at fishing you need experience and consistency. It is good to start learning some about this skill while still young, though, because the mind is young and it becomes faster to learn some of the basics of fishing. Below are some ways through which you can teach your children how to fish.

The first thing you should do is get a boat for the kids while still young. Make sure that you pay more attention to your kids’ safety and be there to answer to their questions. This means that you should take them to the waters when the water is calm just to avoid any accidents from happening during the fishing trip. Have it in mind that your aim is to teach them how to fish, so it is good to keep encouraging them and slowly but surely, they will learn how to fish.

Another tip for beginners is to take your kids to a fishing point where there is more fish to catch. One way to do this is to get used to using a fish finder. You can have a look for the right choice over at www.ajbaitandtackle.com. If you’re doing more than just fishing with your kids (we assume you are, if fishing is important enough to teach them!), then we’ve had some good luck with Garmin’s 550c. You can pick a place such that they are able to catch something within ten minutes or so (OK, maybe not ten minutes, or else the place would be packed with fishermen…but within the first day hopefully!). Note that kids do not have patience if they stay for a long time and with no results they might just give up. Note that quality does not matter at this point…quantity is the important things when getting kids started.

Try to make the activity more exciting. You could take a picture or video as they catch the fish. The kids will enjoy such moments more than anything. After a catch, teach them how to clean the fish using a knife (safely supervise them, of course). Once they have that experience of catching, cleaning, and cooking the fish they will be attached to the activity. Kids need to feel the excitement of everything that they do.  As they grow older, they will learn to enjoy the quiet time, where you can contemplate things…like whether or not to grow that beard!

Once the kids get used to the activity, you could take them with you as you go fishing. There is need to teach the child to be patient when it comes to fishing. Involve them in every activity that you undertake during this time.

Fishing during summer can be tough if it’s way too hot. Aim to go in spring or fall, depending on your location and what type of fish you’re catching. Weather conditions also affect the fish in the water. When the weather is extremely hot, the fish tends to go deep down the water for cool temperatures. In addition, if it is extremely cold the water is cold and the fish will tend to stay near the surface. When you are planning to take the kids out for fishing make sure that the weather is fairly neutral.

The moment your kids are familiar with fishing it is time to present him or her with their very own fishing rod, tackle box, reel and a fishing hat. Your kids can learn fast if you’re patient with them, act as a good teacher, and let them observe you for a few trips.

Have you ever been locked out of your own house before? I have, and it wasn’t a nice experience! Luckily, I can look back on the whole ordeal and laugh, but it wasn’t funny at the time.

One morning last July, I was busy in the kitchen preparing a snack for my youngest boy, Brendan. His brothers were already at school, and my husband at work, so we had the house to ourselves.

Our kitchen looks out onto the front lawn, so while I was mashing a banana, I could see the little squirrel my two older sons had been trying to tame scurrying here and there under the trees.

As I watched, the squirrel decided to conquer the mailbox. He climbed up it easily enough and sat on the top for a while, and then attempted the journey down. Unfortunately, he caught hold of the handle and the door swung open, and the poor little squirrel went crashing to the floor!

Once he’d recovered from the shock, the squirrel saw this as the perfect opportunity to climb inside the mailbox. I didn’t want him making a mess in there, so I raced out the front door, leaving it open, and ran down to the mail box. I began talking softly and gently tapping on the back of the box to coax him out.

Just as I thought my tactics were working, I heard a slam. The front door was shut – the wind must have blown it closed! Now, when our front door shuts, that’s it – you need a key to open it from the outside.

I ran back up to the door and banged loudly. Brendan was only three at the time, but I figured it was worth a try to get him to open it. That’s when I heard him giggling. It turns out we should have named him Damien – it hadn’t been the wind at all; he’d pushed the door closed!

I tried to shout instructions to him through the door, and I could hear him trying, but he couldn’t turn the latch.

There I was, stuck outside in my old gray T-shirt and leggings, with no way of getting back inside!

Back Inside at Last

My first thought was to try next door, because they have a spare key for emergencies, but no one was home. I then went round the back of our house and tapped on the glass sliding door to get Brendan’s attention. I managed to persuade him to unlock that door and finally got back inside. He found the whole thing hilarious!

You’d think I’d have learnt my lesson after that, but a few days later Brendan managed to lock himself in the bathroom. I managed to open the lock by poking it with a screwdriver and luckily he hadn’t done any damage.

The lesson I’ve learnt is to always take my keys with me. You never know when you’re going to need them!

Have you ever been locked out of your own house before? I have, and it wasn’t a nice experience! Luckily, I can look back on the whole ordeal and laugh, but it wasn’t funny at the time. Squirrel Shenanigans One morning last July, I was busy in the kitchen preparing a snack for my youngest […]

My father was always something of a Clark Griswold when it came to family vacations. He used to plan each trip down to the very last detail, but each time, something went horribly wrong. For example, one time our luggage got unloaded from the airport bus outside the wrong hotel in Greece, and we had […]

I’ve heard that growing beard is one of the trends for men nowadays but I just can’t think of what is keeping me to grow this facial hair. I’m wondering if my wife will approve of this or what will my kids think of the new look that I am planning to work on. I […]